They can be a great place to practice programming, algorithms, and AI/ML. The competitions vary widely in their difficulty, prizes, languages available, and feasible strategies. To help you find the right one, I've compiled a list of ongoing and upcoming AI game competitions to check out below.

Note: If you're interested in competitions that are geared towards reinforcement learning, check out List of Active Reinforcement Learning Competitions. 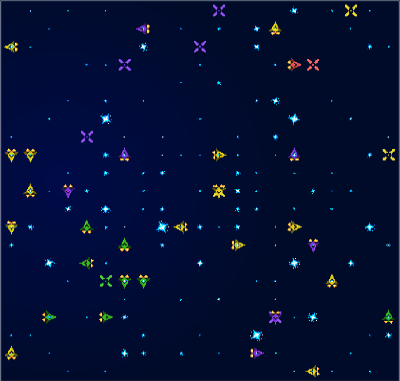 You've likely heard of Kaggle. They're the most popular platform for hosting data science competitions. But they're also home to a range of simulation playgrounds such as ConnectX, Hungry Geese, and the resource management game, Halite by Two Sigma. Players submit agents that compete on a live leaderboard, and prizes include Kaggle merchandise and ranking points for your Kaggle profile.

Kaggle is a great place to start if you're new to AI game competitions since they provide tutorials and free GPUs for training. 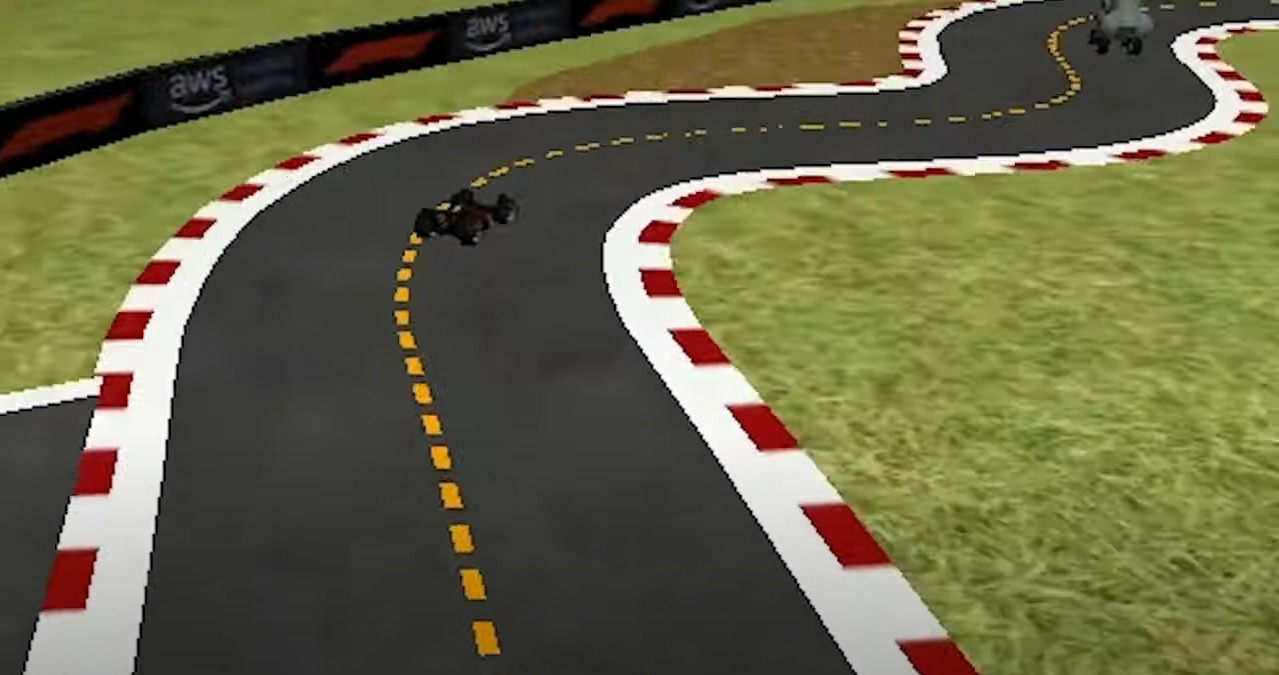 AWS DeepRacer is a 3D racing simulator designed to help developers get started with reinforcement learning. Using their prebuilt model, you'll be able to focus on designing a reward function and tuning hyperparameters.

It's free to get started with 10 hours of training on AWS. Top racers each year receive an expenses-paid trip to compete in the AWS DeepRacer Championship Cup at re:Invent. If you plan on seriously competing you'll need to pay for training, evaluating, and storing your model on AWS.

Aside from their virtual racing tracks, there is also an option to purchase their DeepRacer Evo (a 1/18th scale autonomous racing car) for USD399 to try out your RL model on physical tracks.

Bomberland is our own multi-agent AI competition based on the classic console game, Bomberman. The competition is currently live, and runs year-round with an ongoing leaderboard. Prizes for the current season include $1K in cash and custom merchandise. Top teams will be featured on a casted finale livestream held in March 2022.

The competition features a challenging 1v1 grid-based environment. Each agent controls a team of 3 units collecting pickups and placing explosives with the goal of taking down the opponent.

Participants are free to use any language of choice. Starter kits are available in Python, TypeScript, C++, and Go. Terminal is a two-player tower defense game organized by Correlation One. In Terminal, you take turns building structures and mobile units to take down your opponent.

Players can use Python, Java, or Rust to build their agents. 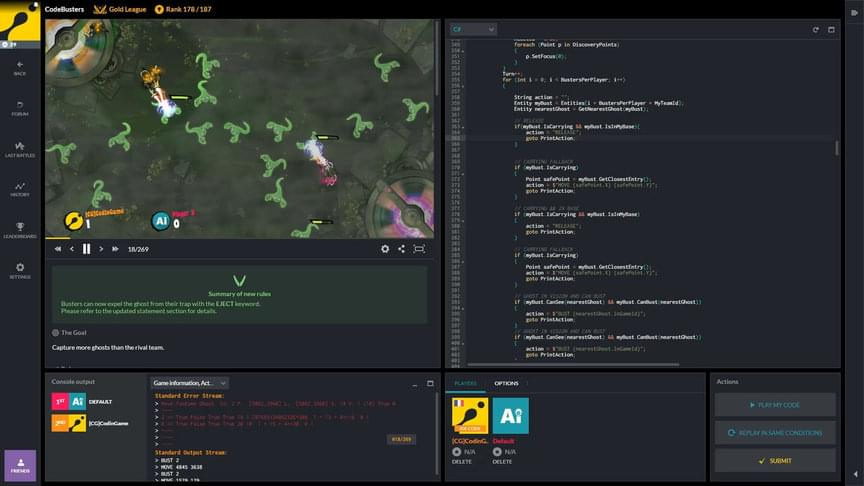 CodinGame is a training platform for programmers and features a range of game-based exercises, in-built IDE, and support for multiple languages.

They host seasonal contests which last for about 2 weeks each. Each contest features a new game, and a ranking system to measure your progress from Wood → Legend. Previous prizes have included CodinGame T-shirts, monitors & keyboards, and Amazon gift cards.

If you're planning on entering, you'll be in good company as each contest attracts thousands of developers, with some of them actively streaming their participation. 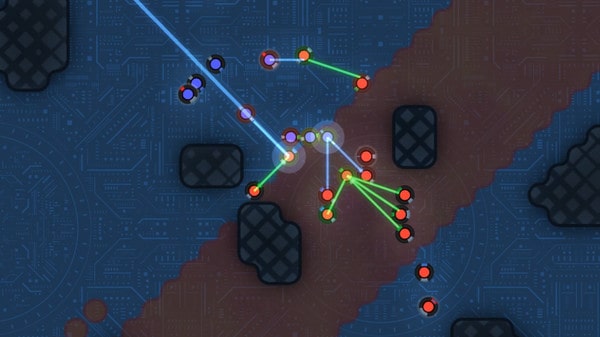 Screeps is an online RTS PvP game in which you control a colony to harvest resources, build units, conquer territory, and trade with other colonies.

The original Screeps game involves players competing in a single persistent open world. A pre-release of 'Screeps: Arena' recently launched in late 2021 which takes place in a match-based arena environment instead.

Both the original Screeps (renamed Screeps: World) and Screeps: Arena are available for purchase on Steam ($15 - $19.95 USD). You can program in JavaScript as well as other languages supported by WebAssembly (C/C++, Rust, TypeScript, Go, and more). 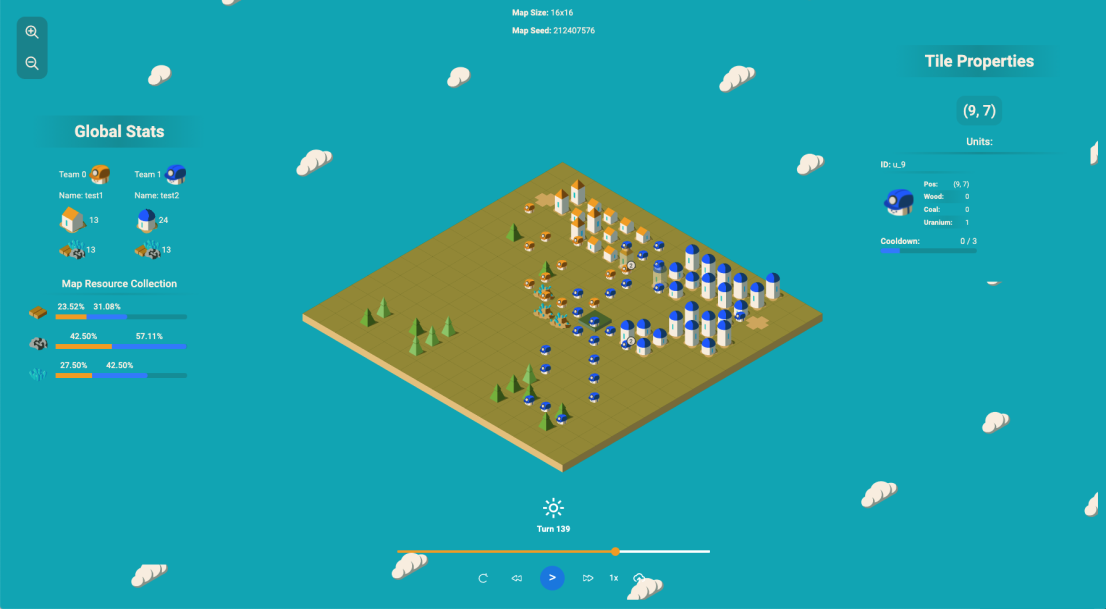 Lux AI is a new AI programming competition that first launched on Kaggle in late 2021.

It features a 1v1 RTS game with a day/night cycle in which you control a team of units that can gather resources, research, and build cities. The goal is to manage your resources effectively in order to maintain the largest city.

The previous competition featured a $10,000 prize pool with support for Python, C++, JavaScript/TypeScript, and Java.

Battlecode is MIT's longest-running programming competition. The theme changes each year, but generally centers around a turn-based strategy game. Participants write an AI player in Java controlling a robot army to take down their opponent.

The next competition will start 3 January 2022. 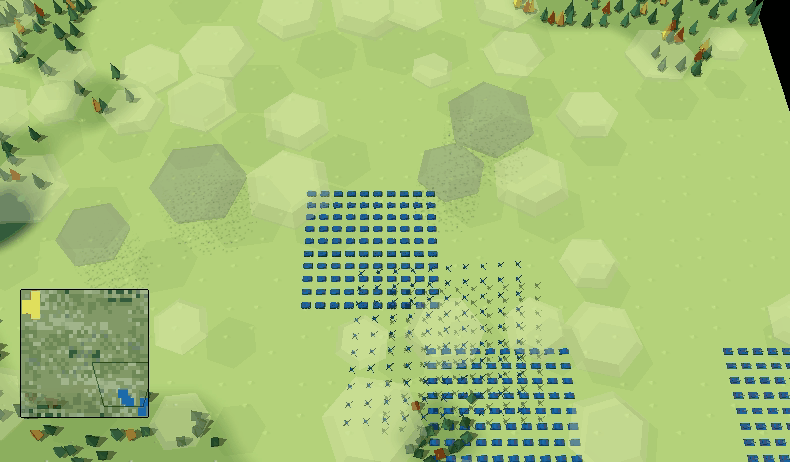 The Russian AI Cup is an annual competition organized by Mail.Ru Group and My.com. Games vary widely between competitions, but previous years have featured RTS, action/platformers, and more.

Each competition sees about ~2,000 participants each year, with prizes that range from merchandise, MacBook and cash (up to 250,000 rubles).

The competition starts in February 2022. Their sandbox mode is open now for practise.

Battlesnake is a multiplayer Snake game. Your goal is to survive the longest - either by eliminating others or trying not to starve.

Battlesnake runs seasonal tournament leagues lasting a couple of months each and prizes include gift cards, customizations, and merchandise. Each tournament usually features a different game mode, live leaderboard, and casted livestreams of the top Snakes on Twitch.

To participate, you'll need to host your agent on your own server implementing the Battlesnake API. You'll be able to use any language, with official starter kits available for Python, Go, Java, JavaScript, and Ruby. 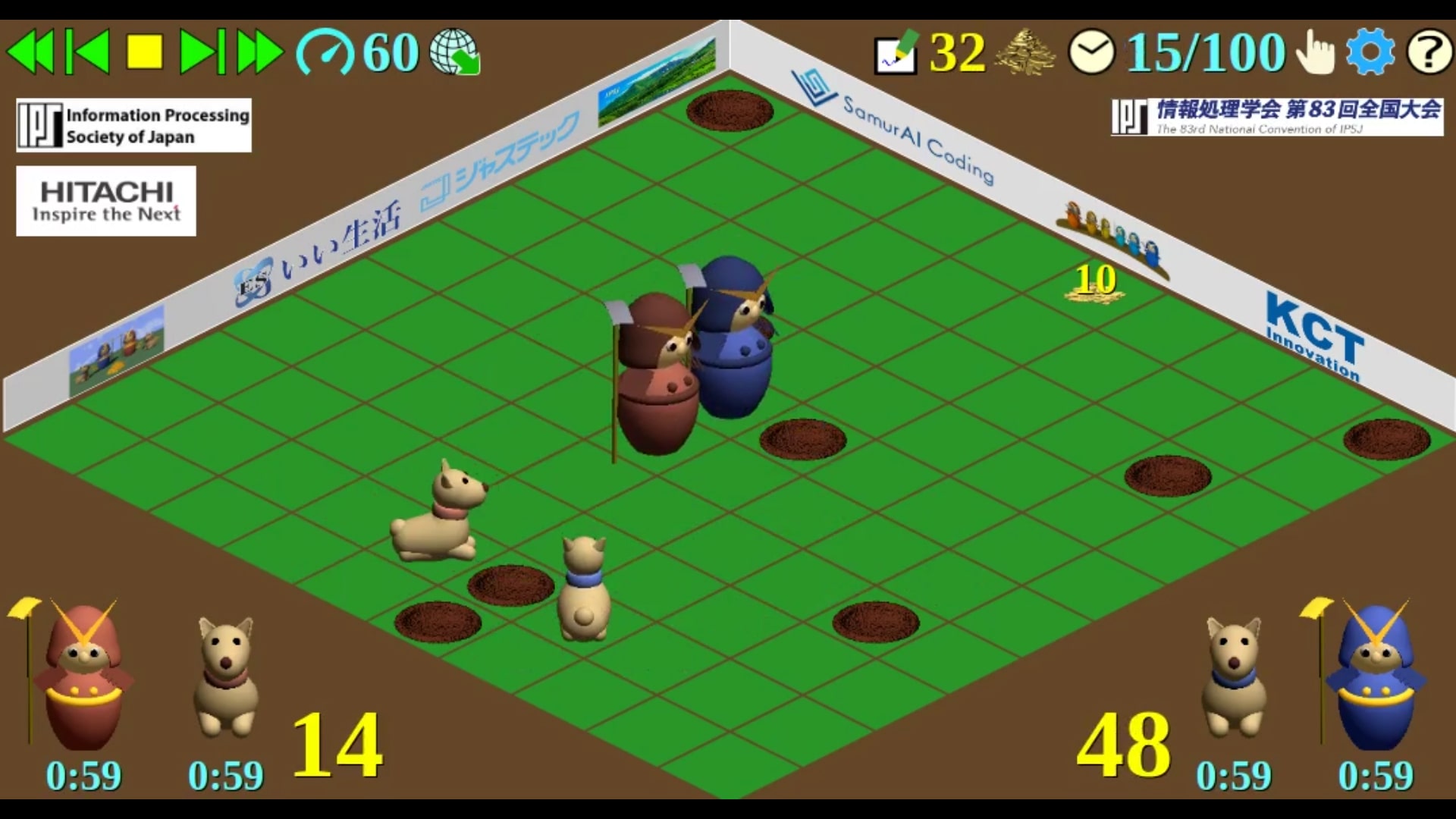 SamurAI is an annual international AI programming competition based in Japan. The grid-based game involves controlling a samurai and dog team to dig more treasure than your opponent. The finale event is usually held as part of the IPSJ National Convention.

The schedule for the 2022 competition has not yet been released, but usually takes place between December - March. Participants can choose from supported programming languages including Python, Java, and others.

AI Coliseum is an annual competition in Java held around July. Each year features a new theme, usually centered around resource management and real-time strategy.

The competition is split into two parts: a sprint and a final tournament, with accompanying streams. Previous competitions have lasted ~3 weeks with ~EUR1000 in total prizes to be won. CodeCup is held annually and organized by the Dutch National Olympiad in Informatics.

Each year features a new game. Previous years included puzzle and board games such as five-in-a-row and tic-tac-toe variants. The 2022 competition features the 2-player board game, 'Spaghetti', and will accept submissions until 22 January 2022. Supported languages are Pascal, C, C++, Java, Python, or Haskell. 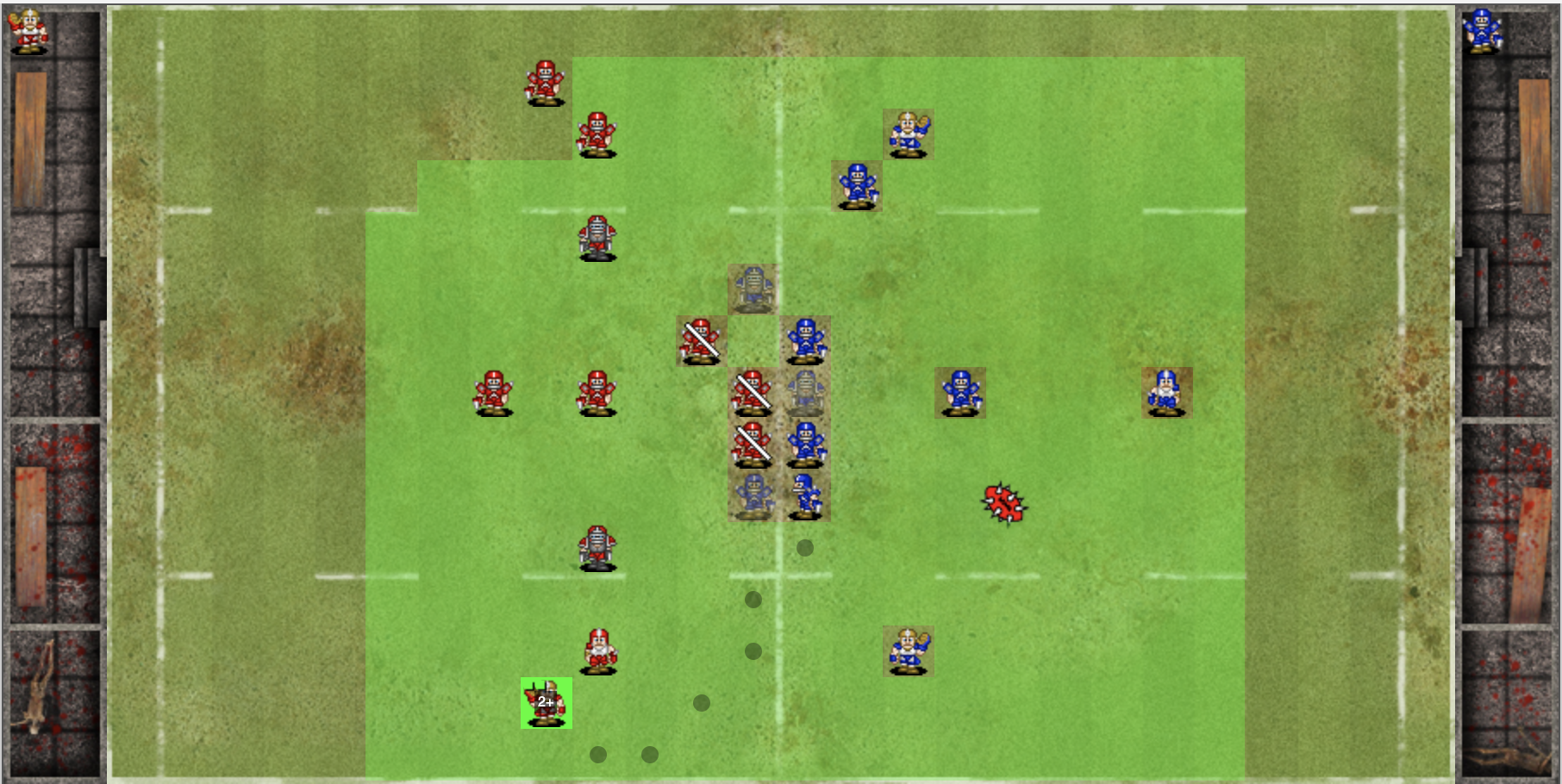 The IEEE Conference on Games (CoG) is an annual event held for researchers in the general domain of AI in games. It's aimed at helping researchers generate new papers and research in game AI, but also features multiple competition tracks open to the public.

Here you'll find a range of games being used in research, such as Dota 2, StarCraft, Angry Birds, Space Invaders and many more. Some competitions will also feature cash prizes in the range of USD500.

CoG returns in August 2022. The competition tracks are yet to be announced.

Here are some additional websites and platforms to check out:

I've tried to make this a comprehensive list of all active and upcoming AI game competitions. As new competitions come up, I'll aim to keep this list up-to-date.

P.S. Interested in a career in AI? Check out our Job Board for top opportunities in AI, Machine Learning, and Data Science.
A community of professionals, students, and hobbyists exploring AI and machine learning.