All blogs / How to build an AI Bomberman bot: introduction to A* pathfinding (Part 3/3)

How to build an AI Bomberman bot: introduction to A* pathfinding (Part 3/3)

An introduction to A* pathfinding

The A* pathfinding (or A* search) algorithm is a popular technique for finding the shortest path between two points in an environment.

In this tutorial, we'll implement an A* pathfinding algorithm in Python to help our agent navigate to a target destination in the Dungeons and Data Structures environment. Make sure you check out Part 1 to get set up (and optionally Part 2 to create a simple bot). 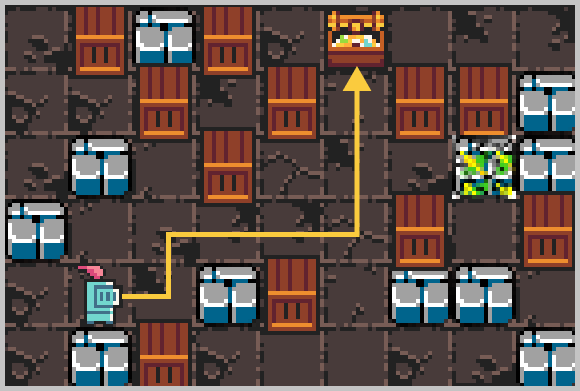 We'll use the A* pathfinding algorithm to help our knight find the shortest path to a destination.

We won't go deeply into the theory behind A* pathfinding here. Instead, check out these useful resources:

The A* pathfinding algorithm

Provided a starting node, A* pathfinding works by:

The goal of A* is to minimize: 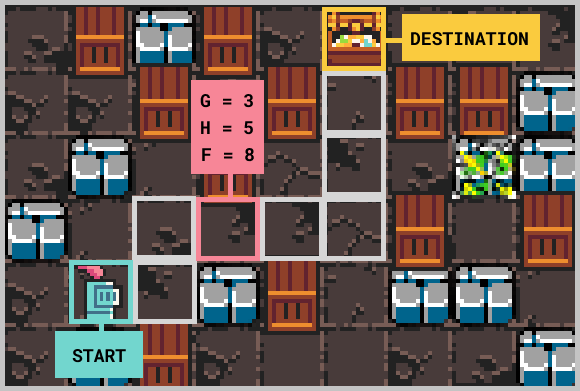 Example of f(n), g(n) and h(n) values in our environment.

What's the difference between A* and Dijkstra's algorithm?

The goal will be to help our agent successfully navigate to a given destination in the environment Dungeons and Data Structures:

If you've been following along with Part 1 and Part 2, we'll be restructuring our project to make it a bit more manageable.

To start, create 3 files in your working directory:

We'll define some helper functions that will be useful for our A* pathfinding algorithm later. Add these to your helpers.py file.

Note: For consistency in the following sections, we'll refer to tiles as an (x,y) location of any tile on the map, and nodes as specific instances of the Node class object (which we'll cover later on). A node will contain a location property equivalent to a tile.

Given a tile, this will be used to get a list of surrounding tiles to search next.

We'll make our target destination the location of any treasure that spawns. (Alternatively, switch out treasure for ammo to make the agent pick up ammo around the map instead).

This Manhattan Distance is an approximation of the distance between our current node and the destination since it will not account for any obstacles. While not perfect, it will work for our purposes.

Here is the pseudocode we will be implementing from [2]:

Here is our implementation (link to full code):

Adding pathfinding to our agent

To check that everything is working, update the next_move() method in your my_agent.py file:

In your terminal, run:

(The --interactive flag will allow you to play as the Knight)

If you've set everything up successfully, you should see your agent picking up treasure around the map (treasure spawns randomly).

Note: we built our path from the destination node backward so this list of actions is also reversed. This is fine since we use pop() which takes actions from the end of the list.

You should now have an agent that implements the A* pathfinding algorithm to navigate to a target destination. From here you can continue improving your agent or try implementing A* pathfinding in your own game!

If you want to read more about A* pathfinding, I recommend reading Amit’s A* Pages.

A virtual playground to practice, compete, and experiment with machine learning.